It was a proud moment for Ethan’s family and all those who have worked in the #JusticeForEthan movement. Watching the Maryland Senate Finance Committee discuss the creation of a groundbreaking approach to training those in the public sector, including law enforcement and first responders, I could feel the empathy and resolve that filled the room. 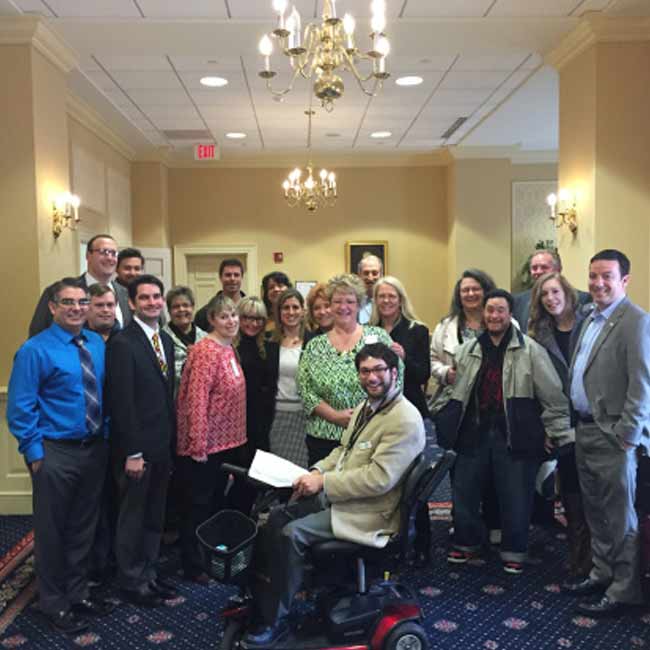 Thanks to NDSS President Sara Weir for posting this group picture on her new blog!
Those behind the scenes were not convinced that there would be enough time, money, or interest in the bill, at least not during this session, for it to gather much support from legislators who would be charged with finding the money and ultimately approving the Ethan Saylor Center for Self-Advocates as Educators.  We were all pleasantly surprised by what we heard today.

The Senate panel seemed to respond favorably to the proposal after hearing the testimony. Sen. Thomas M. Middleton, the committee’s chairman, thanked Patti Saylor and promised that lawmakers would take action.

Middleton called the bill “an opportunity, I think, for Maryland to take the lead.”

This is one of those times when I can’t improve on the original telling of this story.  Video of the full day’s hearings is available on the Maryland Legislature web site.

If you don’t want to listen to the whole thing – I’ve provided some smaller sections:

All remarks on SB853

A great deal of work went in to getting this far, and I can tell you one thing for sure – I walked out of that building feeling positive and grateful to all those who helped make this day happen.  It will be a while before we know the outcome of today’s hearing – for now we go on –

1 thought on “Our Day in Annapolis”