Perspective – Serving on a Grand Jury

Perspective – Serving on a Grand Jury

Last week an article in the news prompted me to consider what it might be like to live in a group home. This week, another article crossed my path that made me look beyond my own feelings and think about the job required by members of a grand jury who happen to hear cases involving deaths in police custody.

We’ve all witnessed what seems to be daily reports of people being hurt or killed by law enforcement officers across the country lately. The public response has been polarized and generated everything from heated discussions to violent demonstrations.

This week has brought all of the memories and feelings flooding back with anniversary and media coverage of the death of Michael Brown in Ferguson and the announcement of a settlement in the Eric Garner case.  The Huffington Post published an article called “How New York Could Convene Another Grand Jury Investigation Into Eric Garner’s Death.” The idea of basically starting over with the flawed (IMO) grand jury process brought mixed feelings.

“But in the year since Garner’s death, there has been another, curiously unexplored alternative to get justice: pressure local officials to simply convene another grand jury. In other words, if the case really was mishandled — as so many protesters, politicians and pundits have suggested — there can be a do-over.”

As I studied the declarations made by the author, I found myself thinking of other cases.

“New York law clearly anticipates that secret grand juries sometimes make the wrong call, but the checks and balances in the system only work if the officers of the court step up and take fair and impartial action to get it right,” he adds.

Is New York the only state that provides options for calling a second grand jury?  Is that really what needs to happen?

Suddenly my thoughts turned to the people who sat on the first jury. What must they be thinking? Since the process is secret, and they’re not allowed to talk to anyone least of all the press, we’ll never know. We can all sit back and say they got it wrong, but we really need to consider the process.

I looked at what Maryland tells perspective jurors in a handbook called “SERVING ON A MARYLAND GRAND JURY” – [MARYLAND JUDICIARY JURY USE AND MANAGEMENT COMMITTEE –  SEPTEMBER, 2012]

“Thus, the grand jury normally will not hear any evidence in defense of the accused.” (p. 8)

Hmm….  Interesting because the only people who State’s Attorney for Frederick County, J. Charles Smith III, called for live testimony seem to be on that side of the isle.

“This forum is not one for advocacy, but strictly for investigative purposes. Again, comment cannot be made on witness testimony but we can confirm that the Lead Investigator at the Frederick County Sheriff’s Office, the Deputy Medical Examiner, a police training expert, and all 3 involved Deputies were subpoenaed and did testify.”

So, what the grand jury hears is unbiased and truthful?

That is also now in question since witnesses from the theater the night Ethan was killed have since claimed that their testimony was incomplete and possibly altered.

Online research includes research on sites such as Google, Bing, Yahoo, Wikipedia, Facebook, blogs or twitter.  This research is not allowed.  Research on these and similar sites can lead a grand juror to information that may seem harmless, but which is incomplete, inaccurate or otherwise inappropriate for a juror to read prior to jury service. (p. 12)

And, the jurors are not allowed to get information from anywhere but what the State’s Attorney provides. How would they knew what was missing? They might get lucky and ask the right questions, but when the only ones answering are defendants themselves and the people they work closely with on a daily basis, what makes anyone think that the information isn’t skewed?

The Washington Post’s Theresa Vargas picked up on something that was off-kilter but wouldn’t raise eyebrows in the grand jury room unless you knew something about Down syndrome:

On Friday, Smith said that the report indicated that Down syndrome and obesity made Saylor more susceptible to breathing problems.

Krevor-Weisbaum said that Saylor had no ongoing health problems. She added that his parents had not seen the autopsy report, although they have requested it, along with all the files from the investigation. She said the family has been concerned that the investigation was handled by the same sheriff’s office that employs the deputies.

We will never know how much of the report that wasn’t filed by the Sherriff’s office until July was available for the grand jury in March.  When it came out, what did those jurors think? Did they notice that every one of the witnesses said that they couldn’t see what happened once the deputies dragged Ethan behind the wall? Did they wonder why each witness was called back into the Sheriff’s office and specifically asked if they saw anyone punch Ethan or touch his throat? 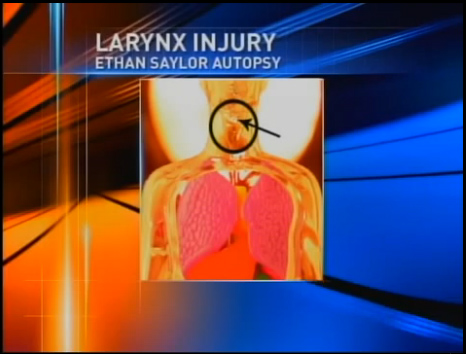 Did anyone in that secret room question the “Unexplained Injury in Ethan Saylor’s Autopsy” ? The media didn’t catch it until a month after the grand jury made their decision. Did any of them watch that report on WHAG and wonder why it was glossed over or ignored during the proceedings?

Imagine what it must be like to live with everyone (including yourself) second guessing your decision for the rest of your life.

Those people can only consider what they are given.

I feel sorry for them really, even though I too think they got it wrong.