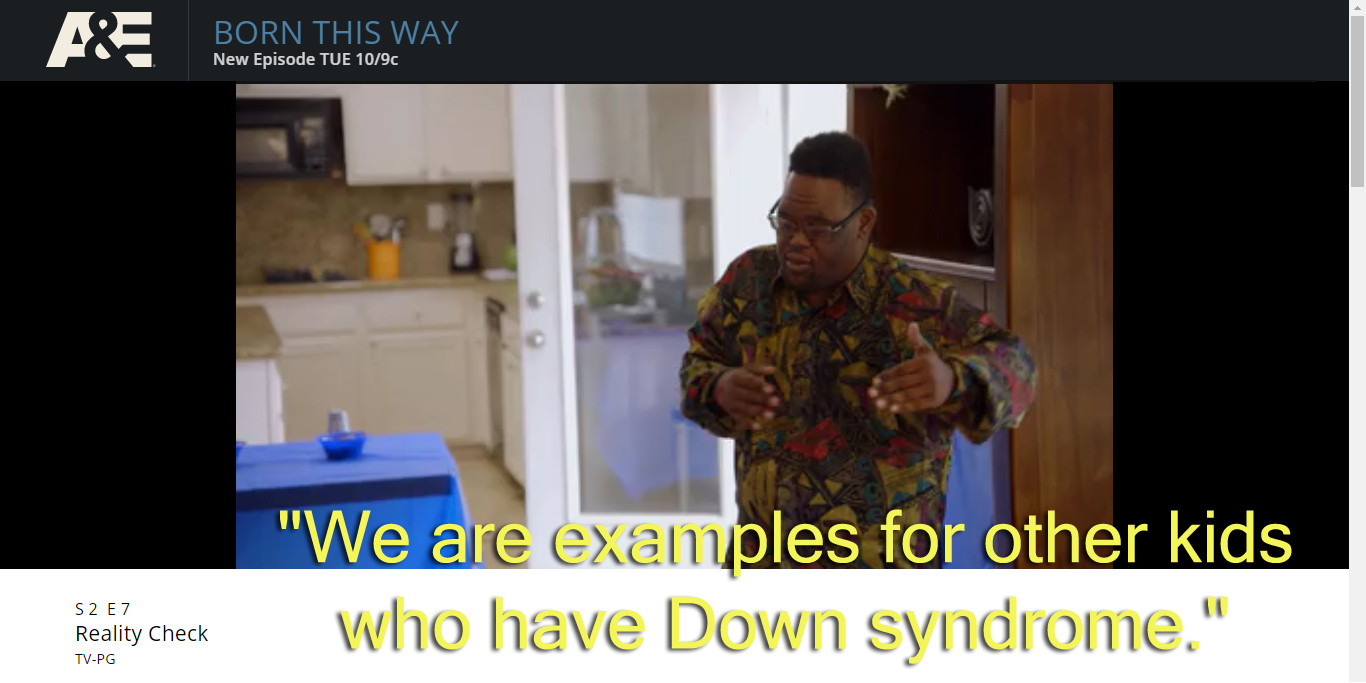 Advocacy Down syndrome in the media

During the first season of A&E’s groundbreaking Born This Way, we got to meet seven young adults with Down syndrome and their parents. In six short episodes, fans fell in love with these dynamic individuals. Critics did too. So much so that the show has been nominated for three Emmy awards including Outstanding Unstructured Reality Program and received a Television Academy Honors Award.

Now that we’re more than halfway through season 2, I’d like to take a moment to reflect on how this season is different – for me.

First, there are some logistical changes that make watching this season a bit different for me. Between seasons my son and I moved. Right now, we don’t have cable so we’re watching on the A&E app (Google Play, iTunes ) or the A&E website the next day. This may not seem like a big deal, but for me it leaves me feeling a bit out of the loop. This certainly says something about my personality, but it also says something about the power of community and how the show makes you feel like you’re part of something bigger. Whether you relate to the cast or the disability rights movement in general, true fans want to be “in the moment” with other fans.

Another personal change on my end is I was lucky enough to meet more of the cast at this year’s NDSC convention. I’ve been friends with Sean and Sandra since we met in Indianapolis in 2014.

This year, we got to spend some time with John and Joyce, 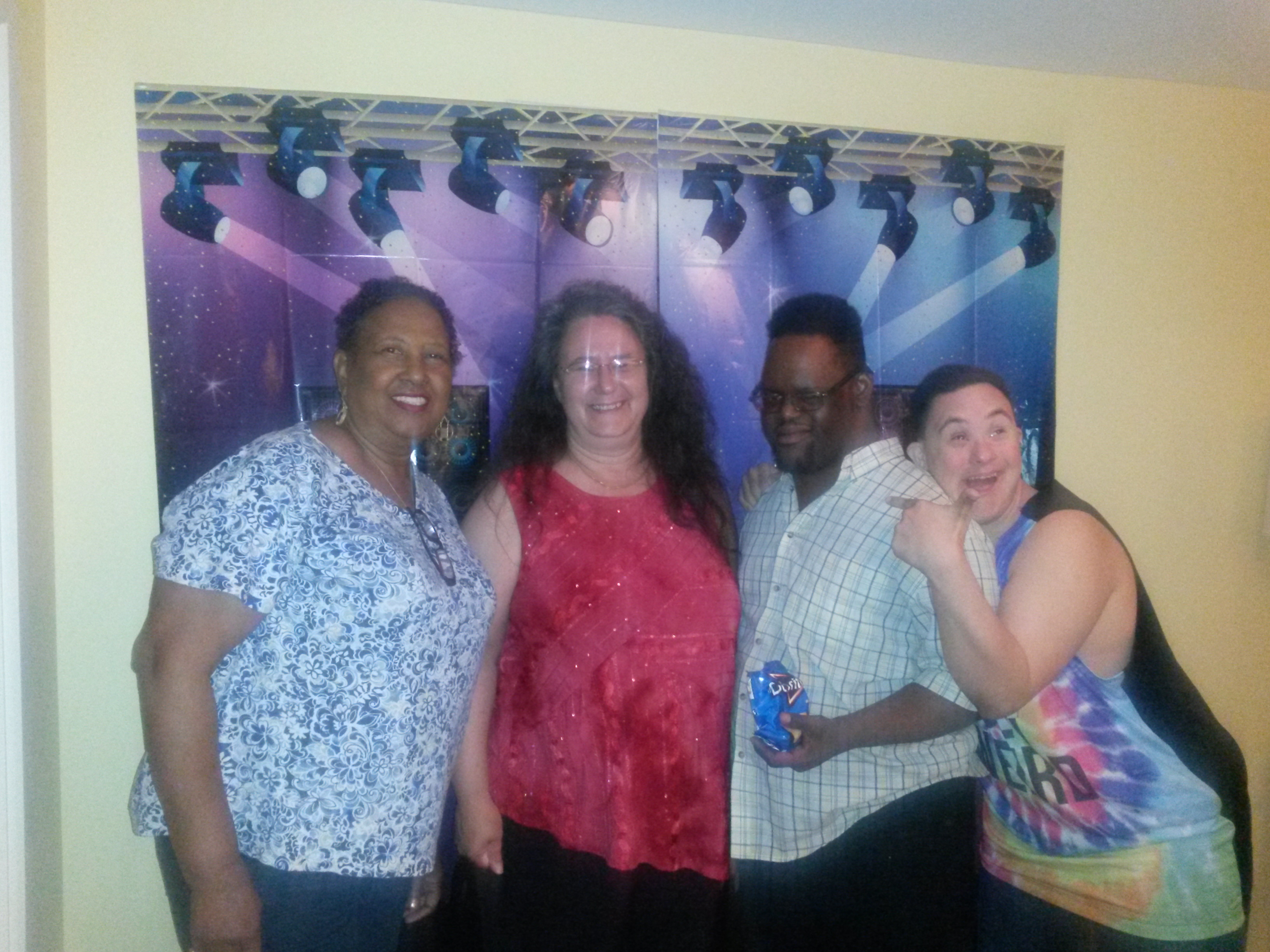 and Josh got to admire Rachel from (somewhat) afar. 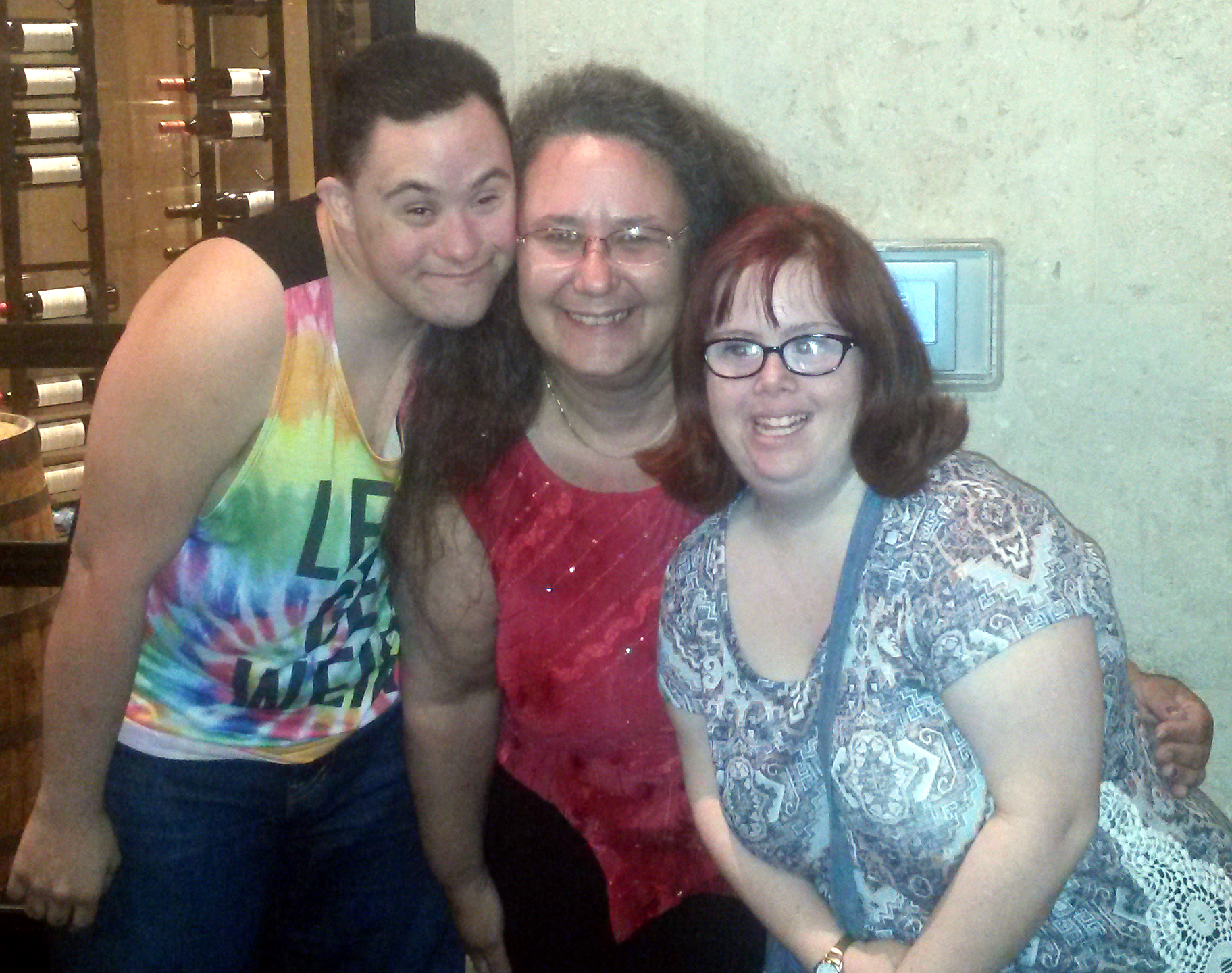 If you’ve been to an NDSC convention before, you know that it truly does live up to its advertising as one big family reunion. So, once you’ve spent time together there you have a connection that’s difficult to explain. This was my son’s first conference as an adult. 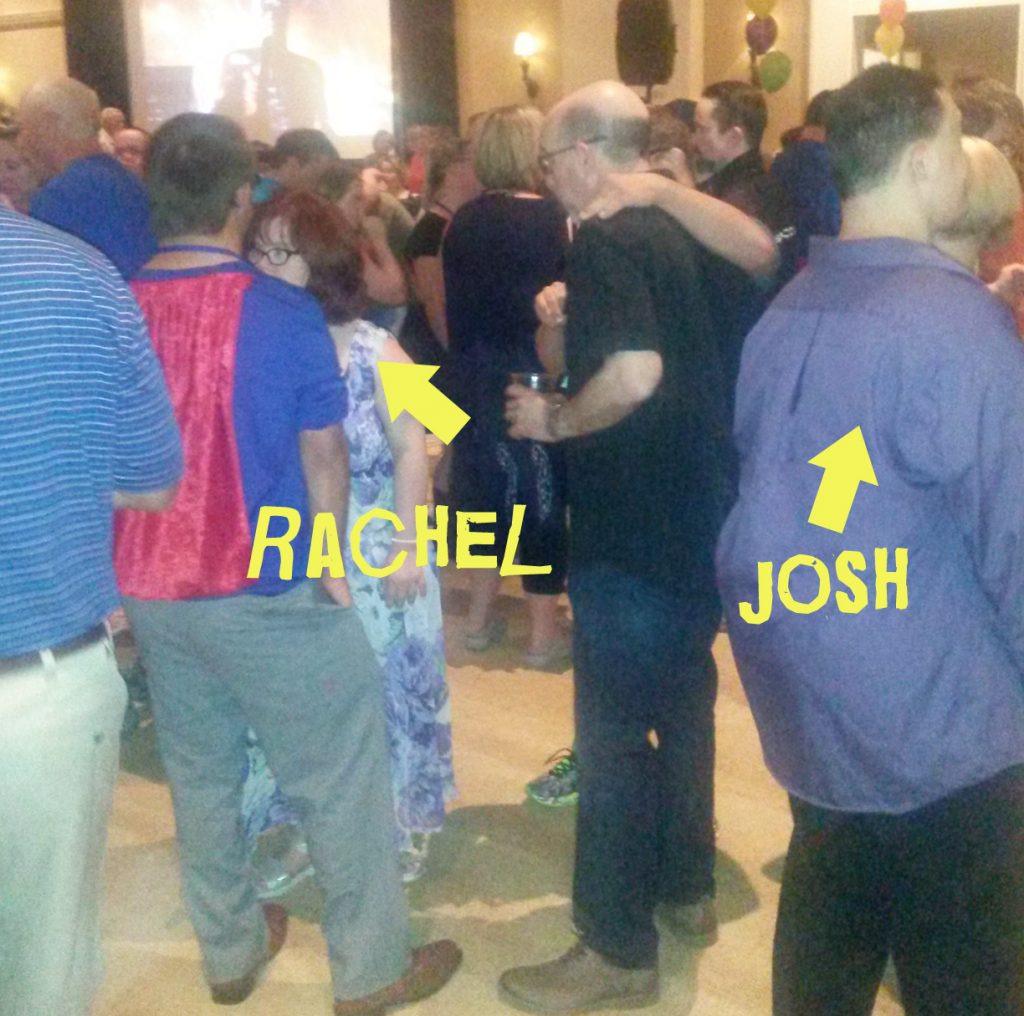 We weren’t able to get him into the programming for adults, so he spent most of his time with me. It turns out that was a blessing for me. I got so see the dramatic change in him as he began to identify with the community and make new friends, including his “new best friends” – the cast of Born This Way. You see, there’s another change from season 1 to season 2. This year he’s watching with me. 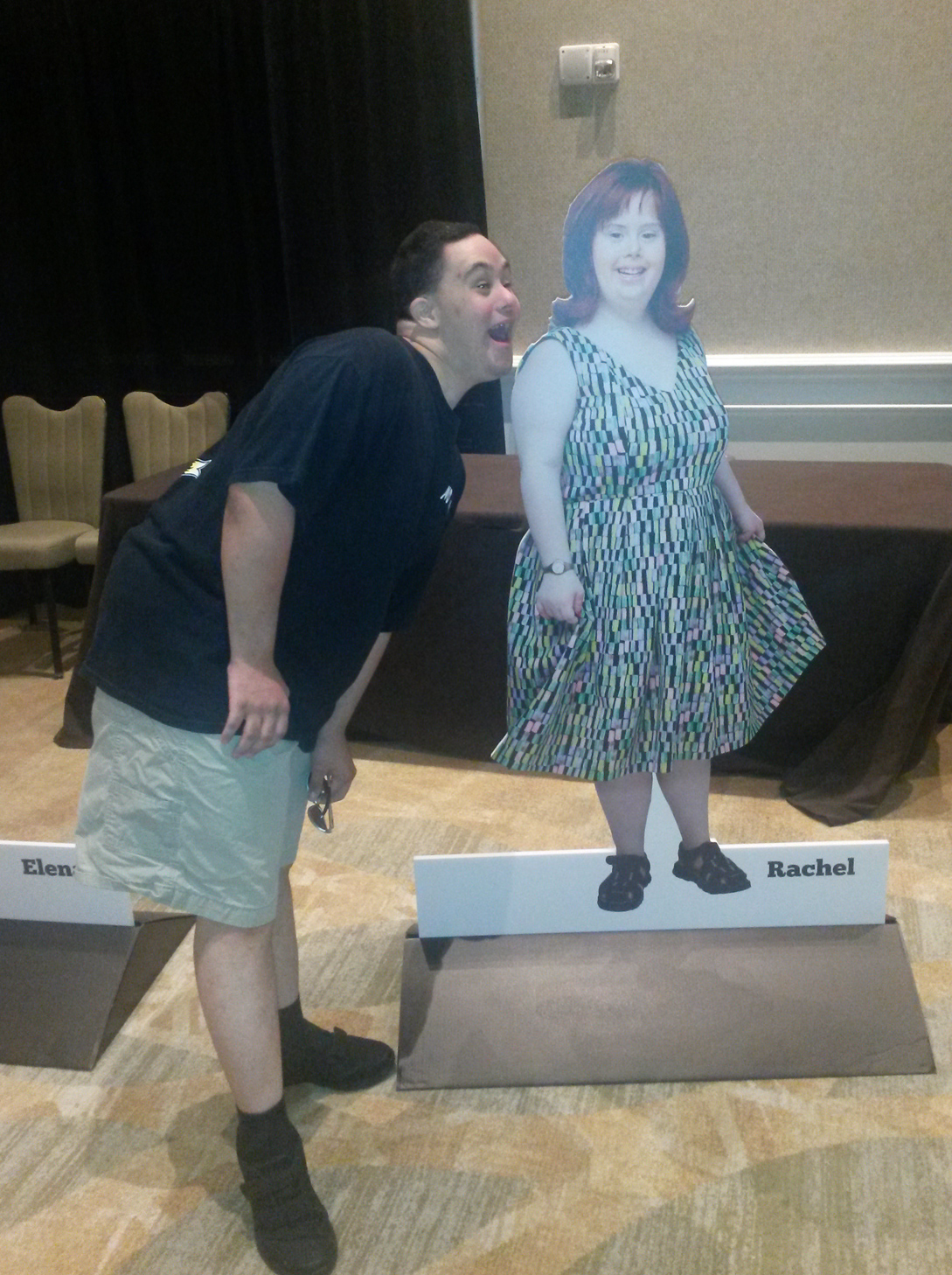 Sharing the show with my son is a huge change. Watching for me, I see things that other members of “the club” see – experiences that parents of children who have special needs can identify with. For example, when Sean and Steven’s families were talking about the idea of trying out a roommate situation, Sean was obviously not happy. Most men his age would be subtle about expressing their opinion. Not Sean, and not most of the people I know who have Down syndrome, my son included. I refer to it as “filter free” conversation. For the most part, if you ask a question, you had better be prepared for a completely honest answer. It wasn’t that Sean didn’t like Steven, he just didn’t think that he needed a roommate [unless of course it was Meghan Trainor.] Parents who are “in the club” know that feeling, the stomach twisting, well, you asked, but oh boy could we talk about this later, and did you really have to say it like that? feeling. There have been plenty of those moments in this season.

Watching with my son, I catch different things. I see things that I think he notices. The first time I found myself doing that was when Megan was talking about moving out on her own. Josh got a very concerned look on his face as he watched Megan tell her mother that she didn’t want her to come to California with her. I could tell that he was concerned or confused, or both. I asked him what he was thinking. His answer was short: “She wants to leave her mother, that’s not right.”  It opened the door for another discussion about his own plans, as I’m guessing it did in homes all across the nation. He got the same concerned face when Elena pushed her mother down.

But, if you could see the faces he made when he saw Sean put on a Michael Jackson costume (something Josh does all the time) or when John gets on the stage and does his rap, you’d know that seeing someone “like me” on television is a huge deal. He hasn’t had that before.

Those are just the moments we identified with. I’m guessing each family has different ones. Some will have more, some less, but the thing is that this is all new to us. We haven’t had this before.

Once again, John’s sage words tell the bigger story. During a particularly tense moment in episode seven he tells his friends

“We are examples for other kids who have Down syndrome.” 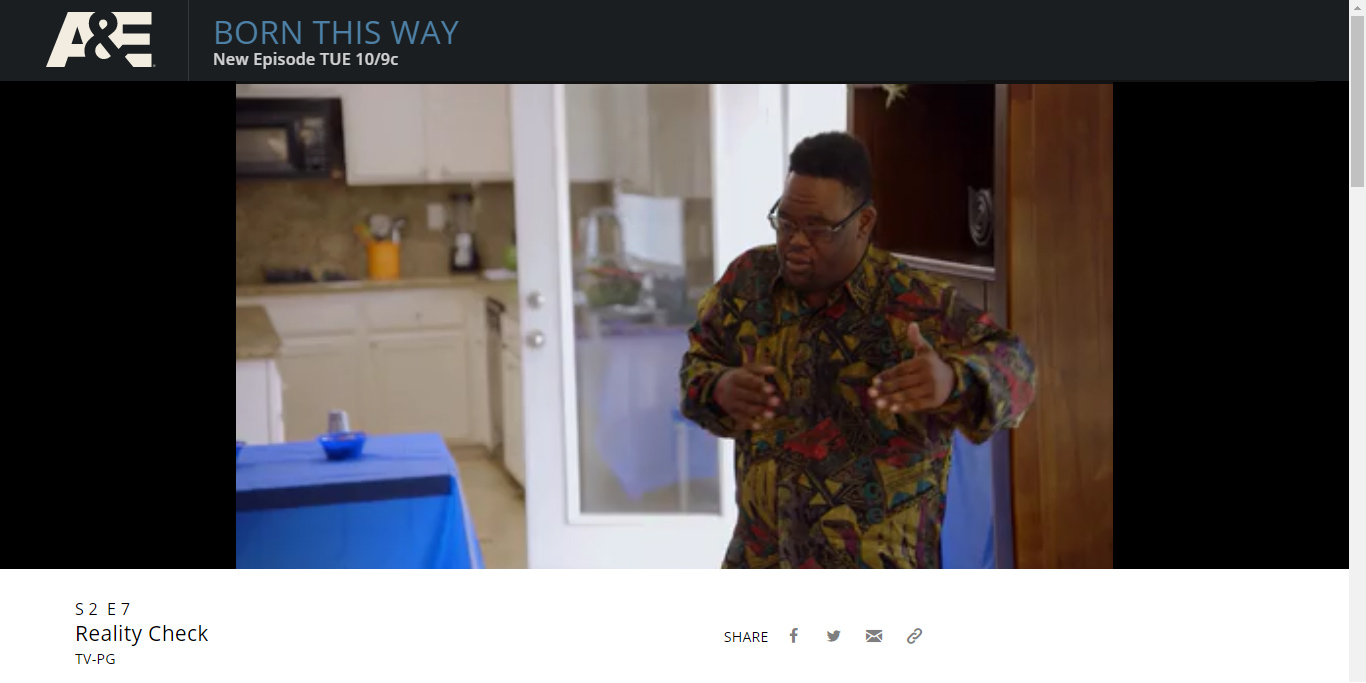 Two years ago I never would have imagined that we could turn on prime time television and see a group of my son’s peers living their lives to the fullest. I’m so grateful that someone did.

After talking to Joyce, I know that she did not expect her son to become a role model, not just for people with Down syndrome in general but for people of color who have Down syndrome and are seen less frequently in typical awareness campaigns.

As season two winds down and the awards start to roll in, I hope the people at  Bunim/Murray Productions and A&E see what a difference the show is making and stay dedicated to the mission.

Will there be a Season 3?