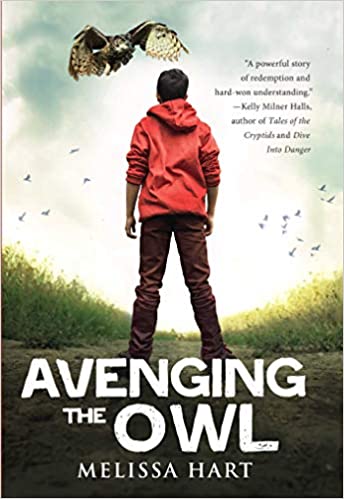 “Most families look pretty normal from the outside,” Solo Hahn reflects. His family looks like a father who quit his Hollywood job to write a novel and a mother who willingly left California to simplify their life. In reality, Solo’s parents fled Los Angeles for a trailer in Oregon after his father attempted suicide. The eighth grader resents being stripped of his home, friends, and possessions. His only happiness is his kitten, and he loses that when an owl swoops down and snatches it. Panicked, Solo attempts to shoot the owl to save the kitten and finds himself sentenced to probation, eventually volunteering at the local raptor rescue center. Solo sees his life spiraling out of control: he is now an “at-risk youth,” and he’s scared of leaving his father alone in case he tries to kill himself again. His only friend is the boy next door, who has Down syndrome. Solo is beginning to find peace in his new life when his father disappears and his family situation boils over. Written in first person, Solo’s narration is interspersed with his screenplay versions of his life, adding an appealing insight. The backstory of Solo’s dad is slowly revealed, along with his mother’s stress and unhappiness with the move. Unfortunately, the attempt to integrate three major and complex themes-raptor education, Down syndrome awareness, and suicide-weighs the story down a bit, and Solo’s decision to stay in Oregon when offered the chance to return to L.A. does not feel believable. But neither issue will likely deter readers, who will enjoy the unique plot and lively pacing. VERDICT A good action-adventure story compelling enough for reluctant readers.