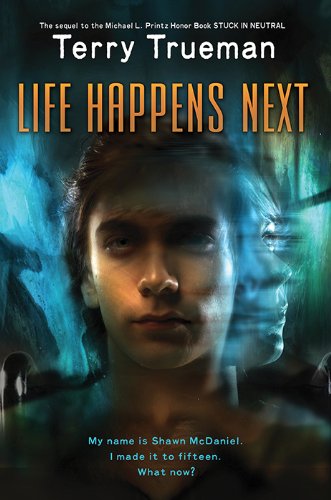 This sequel to Stuck in Neutral (2001) is short but packs a punch. Readers will certainly remember Shawn McDaniel, who is profoundly disabled. He is unable to speak or control his bodily functions, and he can’t make anyone understand that despite appearances, he is something of a genius, aware of everything that goes on around him. Written in the same smart voice, the book allows readers to see life through Shawn’s eyes, not only the frustrations but also the gratitude for what life has to offer him; for example, a mother who loves him and, yes, clean socks. Then the unexpected happens: a relative with Down syndrome, functioning at the level of a five-year-old, is taken in (along with her dog, Rusty) by Shawn’s mother, and for the first time, Shawn feels like there are two souls who understand him. Shawn’s grand mal seizures allow the book to take a mystical turn, which provides a satisfactory way of completing Shawn’s story, especially for those who’ve long waited to learn what happened next. Grades 8-12. –Ilene Cooper