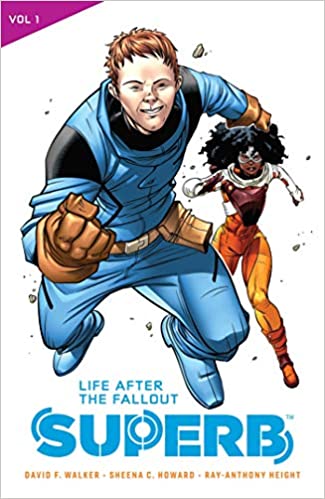 Superb Vol. 1: Life After the Fallout

After the Earth survived annihilation from an asteroid which was destroyed by a group of heroic astronauts, the resultant meteor shower turned Youngstown, Ohio, into a Level 5 impact zone. After a Columbine-like incident in which a superpowered teenager exploded and killed other youngsters, the Foresight Corporation took over Youngstown to find and regulate any other teenagers with emerging powers. Kayla Tate has returned to Youngstown because her parents are scientists for Foresight. Kayla has reunited with her childhood friend, Jonah Watkins, a young man with Down syndrome. Kayla and Jonah are learning about each other again, as a mysterious new superhuman named Cosmosis has become the Internet sensation as the hero of Youngstown. Kayla discovers that Cosmosis . . . is Jonah! Based on his favorite comic book hero, Jonah is using the secret powers he gained from the meteor shower to help people and fight bad guys. To protect Jonah, and discover the sinister mysteries of her town, Kayla uses her own powers gained from a meteor fragment to fight alongside Jonah as the hero Amina. When Amina and Cosmosis discover that young superpowered people are being kidnapped and trained to become Earth’s best line of defense against the possibility of an alien invasion, the two teenage heroes use their abilities to stop Foresight, all the while helping each other navigate through resentment, naivete, and the awkward steps of rekindling their friendship.