COGNITIVE ENHANCEMENT: PERCEPTIONS AMONG PARENTS OF CHILDREN WITH DISABILITIES

COGNITIVE ENHANCEMENT: PERCEPTIONS AMONG PARENTS OF CHILDREN WITH DISABILITIES 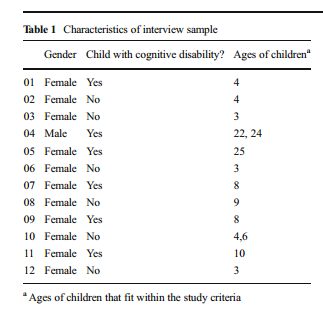 This study was conducted as part of an undergraduate honors thesis project by students at the University of Calgary.

6 THEMES EMERGED FROM THE INTERVIEWS:

MEANINGS OF HEALTH AND TREATMENT

Parents were more likely to accept cognitive enhancements (CE) as a form of “treatment” rather than “enhancement” – even without diagnosed “disability.”   It was more acceptable for enhancements to be given to someone with “below average” intelligence in order to make them more “normal” than it was to give them to children with average intelligence to make them ‘above average.’  It was also more accepted if a child was “struggling.”  Prescriptions and surgical treatments were especially considered to be treatments (of a medical nature).  Natural products and devices were more acceptable for ND children because they were considered to be less risk of harm.  Some considered self-esteem and overall well-being to be a component of health and therefore accepted CE in particular situations.

Parents expressed concern over self-diagnosis and medicating.  Concern was also presented about strict guidelines as to who “qualified” for CE and who did not.  Parents did not want children to be subjected to unwanted interventions or unable to obtain CE because of criteria set on broad definitions of disability.  Both groups expressed a desire to have CE used in conjunction with physician supervision and extensive research.

Generally the first consideration of all parents interviewed.  Considerable risk were considered to be associated with all types of CE.  Parents of CD children were able to provide more concrete examples of harm associated with pharmaceuticals than parents of ND children because they had either more firsthand experience or had previously considered the option.

Parents from both groups expressed that the choice should not be made based on pressure from other parents or social norms.   One of the differences between parents of ND children and children with CD was that parents of children with CD noted the possibility of being forced into using pharmaceuticals because of the current state of health care and lack of support for using alternative, more desirable, methods. 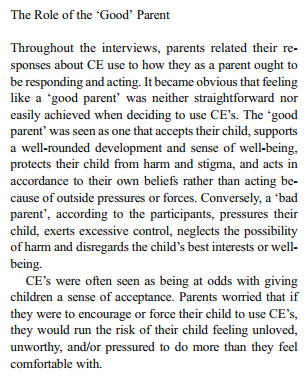 Parents noted that the consequences of below-average ability include: “low self-confidence, limited opportunities, and social isolation.”   The cognitive ability – in and of itself – was not important.   What was important to the parents was outcomes – being able to “fit in,” and for parent of children with CD, being able to communicate, “cope,” learn, gain independence, and function on a day-to-day basis without struggling.  “Natural” abilities were more desirable.   Only the parents of children with CD discussed more “fundamental” abilities such as being able to communicate, learn, and cope with everyday life.

“Parents were generally hesitant toward their children using CE products.  They related this hesitancy to issues of disability, harm, confidence, competitiveness, and acceptance from peers, parents, and self.”

“Parents viewed themselves as being responsible for avoiding harm in their child’s life wherever possible and risking harm for their child for the purposes of CE was seen as unacceptable to all participants in this study.”

Compared to other studies, parents in this one were more concerned with changes in identity of the child that came from a perceived message they would be sending by encouraging or forcing their children to use CE products in order to be “loved, happy, successful and complete.”

There were more similarities than differences between the parent groups.  One important difference was that parents of children with a CD were able to give concrete examples, not hypothetical stories, of what it is like to see your child struggle and firsthand experience with pharmaceutical interventions.  They also:  “expressed that the way society was structured often worked against their child because of their ability differences, and as a result, sometimes they felt desperate and used approaches that they may not have even considered previously.”

For purposes of this study, CE was defined as interventions that would create “above average” results.   Parents on the other hand continuously referred to the interventions as being disability based and used to mitigate struggle.  Using CE products for children who did not have a disability or disease was unacceptable because they could: “damage a child’s self-esteem, run the risk of putting the child’s physical health in jeopardy, and/or perpetuate unhealthy levels of cognitive competition between children.”

Products not marketed as being medical treatments would be more popular.

Results suggest that parents who push their children to use these products will be stigmatized by other parents who view them as “being too preoccupied with outward appearance, overly competitive, and failing to care properly for their child.”  This is multiplied for the use of CE when children have less autonomy (as the case with children who have a disability) and brings up the issue of CE products being used in secrecy.

Parents in this study suggested that they would rely on physicians to know the risks and benefits of these products and be able to monitor their use.  Physicians have reported in the past that they may not feel comfortable with prescribing these products because of the lack of available information – scope of their practice.

Terms such as ethics, or ethical treatment were not used once by participants in this study.  The only reference made to moral decisions was made in reference to not judging parents who use the products.

Researchers talked about the future of CE products and more wide-spread use.  Implications including the idea that use by “typical” children to obtain above average intelligence may negatively affect people with CD, creating further stigmatization and competition for services.

Don’t forget to go back to our “Research Forum” and tell us what you think about this study.