Payday last Friday (snow day) ~ Supervisor out on Monday ~ Brought paycheck home on Tuesday ~ Informed me he would “need to go to the bank on the weekend.”

This morning, first thing, Josh appeared in my office all dressed up, coat on.  I said “where are you going?”  He said “TO THE BANK!”  “Oh yes, sorry, I forgot!”

There he is waiting his turn in line.  He is independent at the bank, reminds me to “stay here in line and wait your turn”, which of course being the obedient mother I am, I complied with his request.

He goes to the next available teller who says to him “hi, how are you?”  Josh replies, “fine, you?”  The teller asks, “what can I do for you today?”  Josh says, as he places his check on the counter……”my check from Goodwill, twenty dollars, seventeen cents, all ones please” and he hands him his ID.  The teller takes the check and ID and Josh stands patiently waiting.  The teller hands him the coins and counts out 20 $1.00 bills and asks, “would you like an envelop?”  Josh replies, “SURE!” 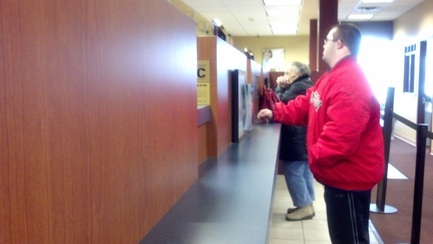 We leave the bank together and as we’re walking to the car I ask him if he likes getting a paycheck.  His feelings were written all over his face – the happy eyebrows, the smiling from ear to ear – and replies “OHHHHHHHHHHH YEAHHHHHHHHHHHHHH!!!!!!!!!”

On our ride home, we had a lovely conversation about money, savings, plans, and goals.  It went something like this:

“Josh, are you ever going to put any of your money into a savings account and leave it at the bank?”

“It’s my money for working hard, gonna save it forever!”

“Well, I get a paycheck too, but I don’t get to keep all my money forever.  I have to spend it on things like food and heat and water and the cable.”

“Well, I’m going to save until I have THOUSANDS.”

”Once you have thousands, will you buy something?”

“Really?  Where are you going to go?”

“Not too far from you guys, down the street.”

“Are you going to use your money to buy a house?”

I started laughing so hard when I realized he was describing a house auction.  Yes, he watches a TON of HGTV!!

So there you go….Josh has a goal….he is going to save ALL HIS DOLLARS until he has THOUSANDS!  Thousands in $1.00 bills is going to eventually get hard to store in the bank’s little white envelops, but I am sure he will come up with a plan for that too!