By Stephanie
Tweet
Today’s story comes from Susan Holcombe – mother of Rion.
One of my favorite things to see is when my son walks up on a group of teenagers “shooting hoops” and joins in.  Usually it’s a group of older teenage boys with four or five basketballs bouncing around.  Whoever catches the ball after it hits the rim shoots next.

Here is what happens….Rion walks up with his lumbering, awkward gait.  The teens look at one another and then, as an act of kindness, toss him the ball.  The teens are kind, but they expect little. 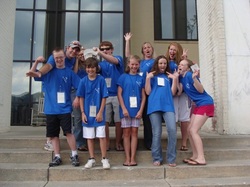 It is more an act of charity rather than an invitation.
Rion takes the ball, stands a good distance away, assumes a stance, eyes the basket setting up his shot, and sinks it.  The look of surprise on the other boys’ faces makes me grin.  I grin again as they toss him another ball as if they are thinking, “Okay, he got lucky the first time…..let’s just see if he can do it again.”

Then one ball after the other, he sinks them from various distances.  The look of joy and amazement on the kids’ faces fills me with joy.  Rion isn’t trying to prove himself.  He is just enjoying the experience of playing with his peers.  After that, he is welcomed and he continues playing with the teens because he now belongs.

Rion belongs because he has won their respect rather than their pity.