Nothing Special: The Mostly True, Sometimes Funny Tales of Two Sisters – A to Z Blogging Challenge 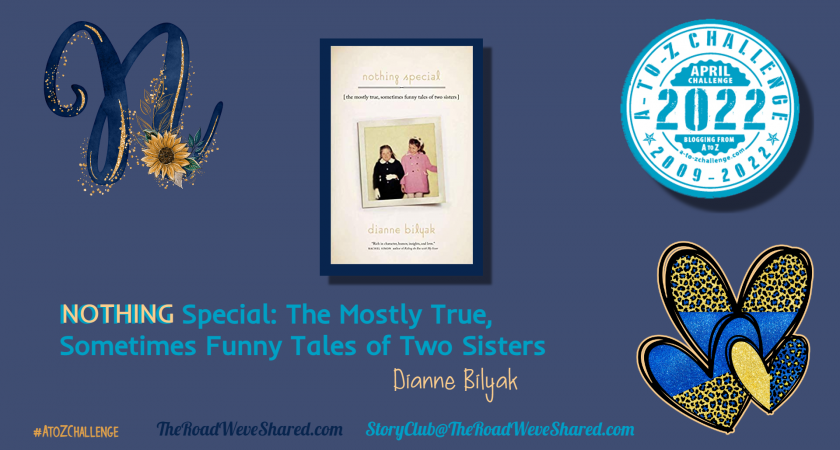 Nothing Special: The Mostly True, Sometimes Funny Tales of Two Sisters – A to Z Blogging Challenge

By Stephanie
Tweet
The job of sibling is sometimes difficult, regardless of what labels are applied to members of the family.  This perspective, when told honestly, can give us important information of the status quo and how to help not just the individual with Down syndrome, but the entire village around him/her.

“Nothing Special  is a disarmingly candid tale of two sisters growing up in the 1970s in rural Connecticut. Older sister Chris, who has Down syndrome, is an extrovert with a knack for getting what she wants, while the author, her younger, typically developing sister shoulders the burdens and grief of her parents, especially their father’s alcoholism. In Nothing Special Bilyak details wrestling with their mixed emotions in vignettes that range from heartrending to laugh-out-loud funny, including anecdotes about Chris’s habit of faux smoking popsicle sticks or partying through the night with her invisible friends. Poet and disability advocate Dianne Bilyak strikes a rare balance between poignant and hilarious as she paints a compassionate and critical real-world picture of their lives. They struggle, separately and together, with the tension between dependence and independence, the complexities of giving versus receiving, the pressure to live as others expect, and in the end, the wonderful liberation of self-acceptance.”
Editorial Reviews

“With charming specificity and hilarity, Bilyak writes frankly about her own identity, and that of her sister’s, comparing her own self-consciousness with her sister’s striking lack thereof. Through honest self-reflection and observation, Bilyak hits home something that we so badly need to hear right now: that people with disabilities are not a monolith, and that there is no perfect way to love or be loved by them.”―Bekah Brunstetter, playwright, screenwriter, and writer and producer for NBC’s This is Us