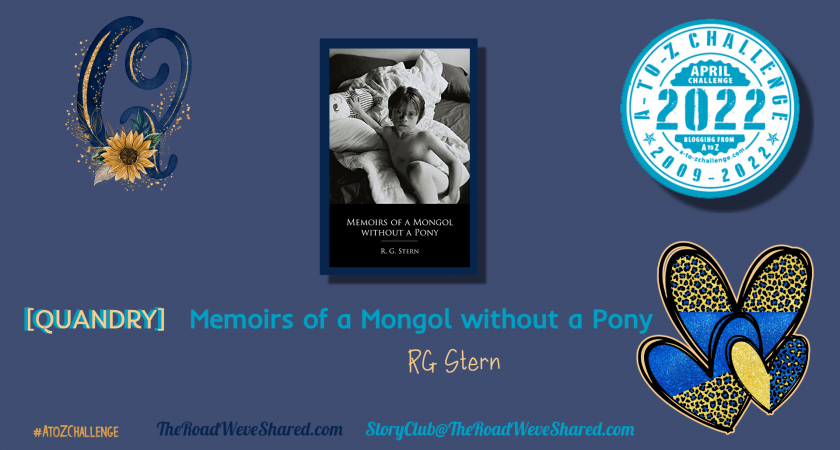 I chose this title, Memoirs of a Mongol without a Pony, to represent the letter Q for quandary because of the title and cover photo.

Mongol is an outdated term considered offensive when used to describe Down syndrome:

“The condition was originally called “Mongolism.” This term dates back to the 1860s when British doctor John Langdon Downfirst described the disorder.

In 1866, Down published the academic paper, “Observations on an ethnic classification of idiots,” claiming that it was possible to categorize different types of conditions by ethnic classifications. He thought that people with this disorder shared facial features with people of Mongolian ethnicity, “ethnicity,” so he named it “Mongolism.” Down further believed that this condition was a reversion to an inferior race “race.” The term soon became offensive because it was racially charged, implying that Mongolian people were inferior.

In 1965, the World Health Organization finally withdrew the name after a request by a delegation from the Mongolian People’s Republic who wanted to reclaim the name of their native people. The condition was re-named Down syndrome, after John Langdon Down, while “Trisomy 21” is also used. (“Down’s Syndrome” is still used in the UK.) ” – from Psychology Today

The author addresses the political incorrectness in the introduction, but doesn’t really say why he uses the term. He also warns about the prolific cursing that is used throughout the story telling readers: “I am not apologizing for my cuss words and if they offend you, tough shit don’t read the book. Fair warning.”

It is this type of humor that propels the story throughout the 328 pages. The story is told from Shane’s point of view- as told to his father R.G. Stern.

Personally, I would change the cover photo as well as the title; to something that looks a little less illegal. [But it’s Shane’s story, not mine.]

If you can overlook these initial affronts to sensibility, the stories are funny.