By Stephanie
Tweet
“SOCIAL” ~ What does that word mean to me?  I guess the first thing that pops into my head when I think of the word social is “relationships.”  Josh has had so many over the course of 18 years, it’s really difficult to decide where to start.

From Josh’s perspective, I think of family, friends, neighbors, school, work and social activities.  From my perspective, I think about relationships that I have developed because my son has Down syndrome.  If it weren’t for Josh AND Down syndrome, I never would have had the opportunity to meet so many amazing people!  The thought of that just makes me sad so I’m thankful our path has lead us here!  This is exactly where we’re meant to be!

I tend to breakdown our life with Josh’s by categories, so I’ll do it again here.  I think it’s easier for my brain to process where we’ve been if I break things into segments.  The one thing that remains CONSTANT, no matter what “category” we’re living in, everyone seems to fall in love with Josh.

I will start by saying that I can instantly make a connection with another family who has a loved one with Down syndrome.  I have no problem approaching another family, no matter where we are.  If a connection is made great, if not, no problem, but I am drawn in to at least say hello.  My husband, Tom, likes to call this a “subculture” that we belong to.  We have made some very, very good friends by just approaching someone to say hi.  great connections have been made this way.  I don’t know why Tom and I react this way, but we do, feeling an instant connection.  We can’t possibly be the only ones?  :)  I will also go out of my way to have a conversation with an adult who has Down syndrome should I see them out in their community working or playing.  I feel blessed to have just a few minutes of their time to chat with them!

Josh participated in the typical early intervention services in our home, as well as attending a play group several times weekly.  Josh did not make friends in this stage of his life, other than the peers he played with during his group participation.  However, mom made a life-long friend during this stage of Josh’s life.  His occupational therapist, Irene, and I became partners, a team.  We knew when to push him and when to back off.  She had my blessing to push as hard as she felt she needed to ~~ mostly because he was stubborn and very, very silly.  It was important for me to find a balance between being tough and being fair.  Irene and I made that connection and were always on the same page.  I am pretty sure she fell in love with him and his sense of humor!!!  From the time Josh moved on from EI services at the age of 3, we knew we could call Irene whenever we needed her and she would always be there for us!  We feel so blessed that she has remained a part of our lives and continues walking with us on The Road We’ve Shared. 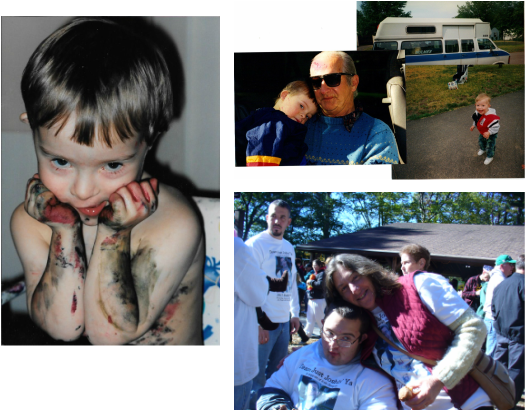 The same exact situation occurred during Josh’s time in preschool.  He had friends while he was school, but they did not carry forward into the next stage of our lives.  However, I made a very good friend, Josh’s teacher, Ms. Margaret.  This is another professional who fell in love with my kid, dedicated herself to her students, and went way above and beyond the call of duty.  She is someone with whom I developed a mutual respect and friendship with.  Ms. Margaret now has three beautiful kids of her own and I love that I can call her my friend.  From what I hear, Josh is often a topic of conversation in their household…..lots of stories of his younger days to be told; just Ms. Margaret teaching her kids that everyone is different, yet we’re all the same!  She also continues to walk with us on The Road We’ve Shared! 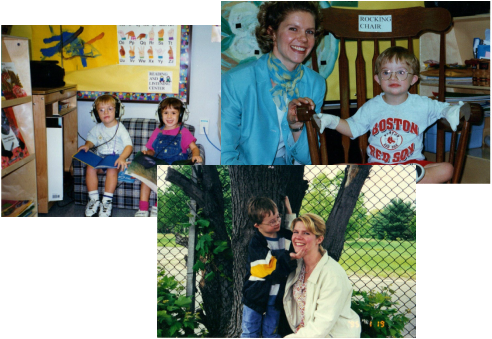 This is a biggie, since Josh spent seven years in an inclusive environment!!  Josh had a one-to-one paraprofessional, Ms. Mayra, who worked with Josh throughout his elementary school years…..yup, all seven years!!  <—- THAT is dedication!!!!  After Josh graduated from grade 5 and moved on to middle school, Mayra and I became very close friends and have remained the best of friends for the past seven years, going to ball games, on trips and always making time to have coffee on Mayra’s way to school in the morning!  :)  A huge and heartfelt thank you to Mayra for being on The Road We’ve Shared with Josh and I for so many years! 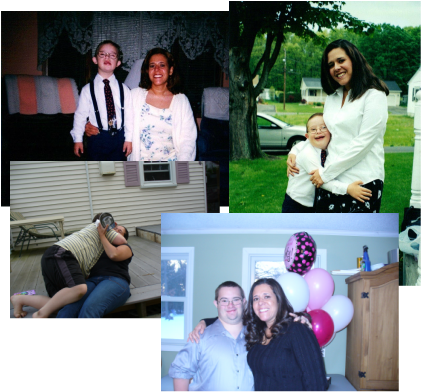 Josh also made two very close friends while in elementary school.  Jacob was Josh’s BEST FRIEND.  They did soooooo much stuff together, swinging, sleepovers, the circus, swimming, camping and they remain friends today!  Even while Jacob is busy preparing for college, working two jobs (at one point) and finishing up high school with honors, he still finds the time for an occasional game of Wii bowling.  :)  There is nothing that makes a mom’s heart smile like watching both these boys grow into young men.  So very proud of both of them!

Dominique was paired up with Josh quite a bit through their years together in elementary school, as Dom seemed to be able to pick up on Josh’s speech better than most.  He was nearly non-verbal back then and used a lot of sign language to communicate, along with sound approximations, a communication book, body language and gestures.  Dominique has decided to pursue a career as a Special Education teacher, because of Josh.  What a HUGE compliment that is to him and their friendship.

Dominique, Jacob and Josh will be graduating TOGETHER in June!!  THIS IS INCLUSION AT ITS BEST and a beautiful example of The Road We’ve Shared!

Middle school was the easiest for us, as Josh moved to a life skills classroom and the pressure to perform academically finally ended with a great sigh of relief, in addition to having a special education teacher who “just got it”!!!!  She just understood all of his behaviors, what was connected or caused by the syndrome and what wasn’t.  These three years were extraordinarily relaxing for us as parents and I think even for Josh.  It was a much needed break from what felt like some sort of pressure (only in our minds, I’m sure) in an inclusive environment.  Josh could just be who Josh was with no expectations of him to be something he wasn’t.  Josh made many friends in this classroom and they would all travel together through middle school and up into high school.  A few of these friendships extended outside the boundaries of the classroom environment, but most are friendships made and maintained within the school setting.

We, AGAIN, fell in love with his teacher, Andrea.  She was devoted to her students beyond anything we had ever witnessed.  Although we only see Mrs. Gates occasionally at functions and we wish that we got to see her and talk to her more, we will never forget what she meant to us.  Here is a very specific story regarding Mrs. Gates:

She was a runner.  Every year, she would participate in the Jolly Jaunt 5K fundraiser for Special Olympics.  She would tell us every year, “I’m not running across that finish line without my kids!”  So, we would bring her students to her, wait 50 yards out in front of the finish line and, as she approached us, she would gather them up and run across the finish line TOGETHER with her kids!!  What a FABULOUS time we had on The Road We’ve Shared with Mrs. Gates! 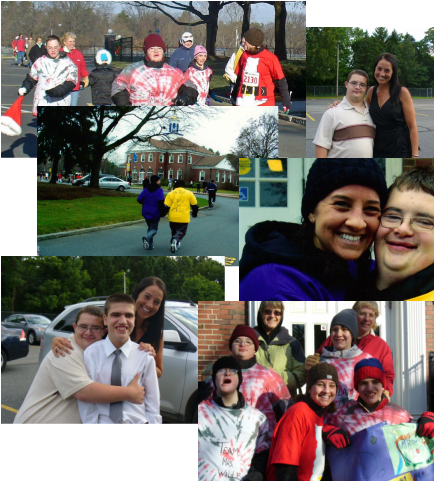 High school is really when Josh started to come out of his shell and actually “want” to be involved socially with other people.  Up until this point, he was absolutely perfectly content to stay home and be with just family or completely by himself.  I think his shell was a mode of protection for him.  His speech was very hard to understand and I think he knew that.  I can remember times when he would want to say something to someone, but would only talk to people he knew would understand him.  About this time was when we had to learn to STOP interpreting for him.

High school has been nothing short of spectacular for the whole family!!  His teacher is Marie or as Josh calls her “SZENDA” (almost never puts Mrs. in front of her last name)!  How we have been so blessed to have all of these special people in Josh’s life, I will never know, but Mrs. Szenda again is just one of those teachers who just gets it.  She knows how to be tough but fair.  The kids absolutely adore her and I cannot blame them one bit.  Josh has made many friends in high school, old friends, new friends, friends without disabilities, and friends with disabilities.  THEY HAVE ALL WALKED WITH US ON “THE ROAD WE’VE SHARED“!! 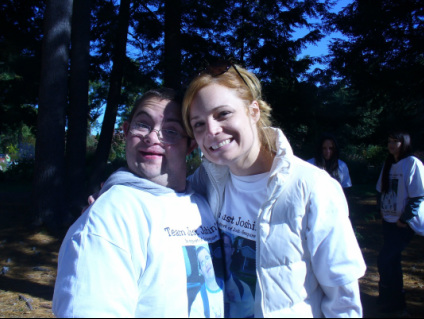 There are so many social relationships that I could talk about, but there’s just not enough room for this post or the time in the day.  I am attaching a slideshow for all of you, since I believe a picture is worth 1,000 words!

The list of relationships Josh has with people is ENDLESS and it is nearly impossible to name everyone, so I don’t know why I’m trying!!  If you want to see what Josh means to everyone his life touches, take a look at the Buddy Walk pictures…..THAT is what Josh means to everyone, people coming from near and far to just be with him!
There is an
ABUNDANCE OF LOVE ON THE ROAD WE’VE SHARED
with so many amazingly wonderful people.
#Just Joshin' Ya