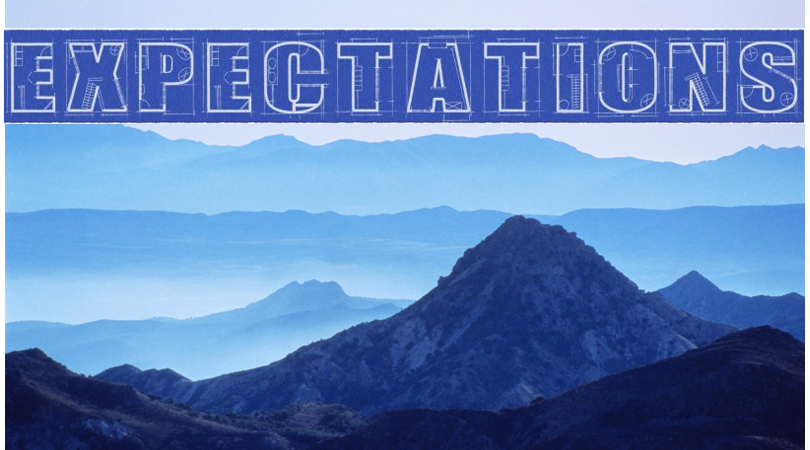 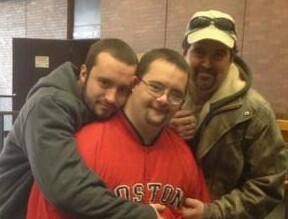 Josh with his brand new, court-appointed guardians, big brother Tim and Dad!
Do you have a child with an intellectual disability or developmental delay?  Have you thought long and hard about whether or not to apply for guardianship of your son or daughter once they turn 18?  So did we!  Here is the process we worked our way through with Josh.

1)  All states have different rules.
2)  Every family has to make their own decisions about what is best for them and their child.
3)  I am not a lawyer nor do I profess to be one.  I am also NOT someone you should take advice from without consulting the “real” professionals before making decisions that involve your loved one.
***For information regarding the laws in the state or country in which you live, you should contact your local agencies and/or an attorney.

With that said, we live in Massachusetts.  In Massachusetts, when you have a child with a disability, whether determined at birth or afterwards, your child is eventually connected with the Department of Developmental Services (the new name for the old Department of Mental Retardation), since it seems we can no longer use the word retarded or retardation ~ *another blog entirely*.  Since Josh is 18 years old and my memory is that of a 40-something year old woman, I don’t even recall how we initially got involved/connected with DMR – sorry DDS (old habits die hard), but I know he was registered (maybe once we began receiving Early Intervention services) as a person who would eventually need the services of the Department of Developmental Services.

In our state, until the person with a disability turns 22 years old, it is the responsibility of the early intervention provider, then the school systems to provide the necessary services, i.e. speech therapy, occupational therapy, physical therapy, social groups, etc.  Josh never qualified for any services directly through DDS, until he turned 18 years old this past May and became a legal adult in the eyes of the state, then things started to change.

The school system notified the state (DDS) that Josh would be turning 18 in May of 2013.  DDS contacted us and came out to the house to do an in-depth interview and I mean IN-DEPTH……a binder full of forms with questions after questions after questions about what Josh could and could not do.  We also provided the state with all prior psychological testing, IQ testing, adaptive behavior testing that had been performed previously by the school system.

If you have a child in the school system, you know about these tests!!  In our state, they perform a full battery of IQ and adaptive behavioral testing every three years (to prove that your kid still has a disability)…..as if the Down syndrome was magically going to disappear.  These tests are VERY TOUGH, as a parent, to read through.  ~~~ If you read my first blog and saw where I mentioned the rollercoaster ride…..these tests are the part where the rollercoaster is going really, really fast, downhill, takes a sudden turn where you almost get thrown from the car you’re riding in, then snaps your neck back in the other direction, only to throw you down another hill where you fall out, sit and cry and scream and cry and use swear words and THEN collect yourself, stand up, dust off, and say some more swear words directed at the people doing the tests about how they don’t know your kid and blah, blah, blah, blah.  These tests are like a punch in the stomach kind of thing – you work your butts off for nearly three years, you got your kid talkin’ and walkin’ and making great strides (so you thought) and then someone comes in and compares your kid to what typical kids their same age are doing and the reports come back with words like *delayed *impaired *mild *moderate *severe *IQ *adaptive behaviors *and all these other things that make your jaw drop in disbelief.  Tom and I honestly got to a point where we would read these reports, literally laugh out loud, then look at each other and says things like “hey, in case you didn’t know…….you’re kid is delayed!”

These “tests” are the absolute worst UNTIL……UNTIL you decide that they do not define your kid and you can turn the tables on the test givers!  🙂  Sitting at an IEP meeting for Josh and his speech therapist suggests that the school system provide him with speech therapy (maybe) twice a week.  We’re holding, in our hands, our trusty little TEST that THEY administered that says my kids speech is “severely delayed in expressive and receptive language skills!!!”  Ummmmm, no I don’t think we will accept your offer for speech therapy twice a week, but we would like Josh to have speech therapy EVERY SINGLE DAY HE IS IN SCHOOL, FIVE DAYS A WEEK.  What do you think they said to our request?  That’s right.  Every single day, five days a week, Josh would have one-on-one speech therapy for 30 minutes, 2 1/2 hours weekly, not 1 hour.  That is how you take those tests and turn them around to benefit your child and HELP YOU to advocate for what you think your child needs.

We finally hear back from DDS that he has been approved for their services as an adult.  We then went and applied for Social Security Disability Benefits.  Josh never qualified for SSI prior to becoming “an adult” because his qualification was based on his parents’ income and we have always been a two-income household.  Once he became an adult, we applied for Social Security and he was approved.  If you are going to do this for your child/adult, be careful to watch timelines.  The Social Security Administration only books appointments out 3 or so weeks and will only give you an appointment within the four weeks before your child turns 18.  So be patient with the process.  It does not move quickly.  Luckily, we had a great interview and liked our SS coordinator very much.

Even though DDS has approved Josh for adult services, they do not play a role in any of his services until he turns 22.  The school system/city is still responsible for whatever his program might look like.  I am only in the very beginning stages of this part of Josh’s life, but I can already see a bunch of holes and gaps and places where he could fall through the cracks.  *Another blog soon!

The Department of Developmental Services then began to guide us through the process of petitioning the probate court for guardianship.  Now guardianship, as some of you may know, takes away your young adult’s rights.  So this decision does not come without putting a lot of thought into it.  We made our decision based on a few hypothetical situations and things we have seen in the news.  We knew we wanted to protect him from financial and/or medical harm.  We know that Josh is not capable of making appropriate decisions regarding his finances or his healthcare, so the decision for us was pretty simple.  There are newer ways of doing things out there and I would encourage anyone reading this to look into all the different possibilities that exist.  We simply chose to petition for guardianship.

DDS did EVERYTHING for us and we did nothing except follow a timeline.  The first course of action was DDS “referring” us for a psychological evaluation which would include Josh being interviewed separately from us.  This is called a CTR (Clinical Team Review).  DDS made us an appointment, we showed up, two very lovely gentleman, one a psychiatrist and the other a social worker, brought Josh to their office for an independent interview, then Josh returned to the waiting room and it was time for mom and dad’s turn to be interviewed.  From the time we walked in to the time we walked out…..30, maybe 45 minutes. 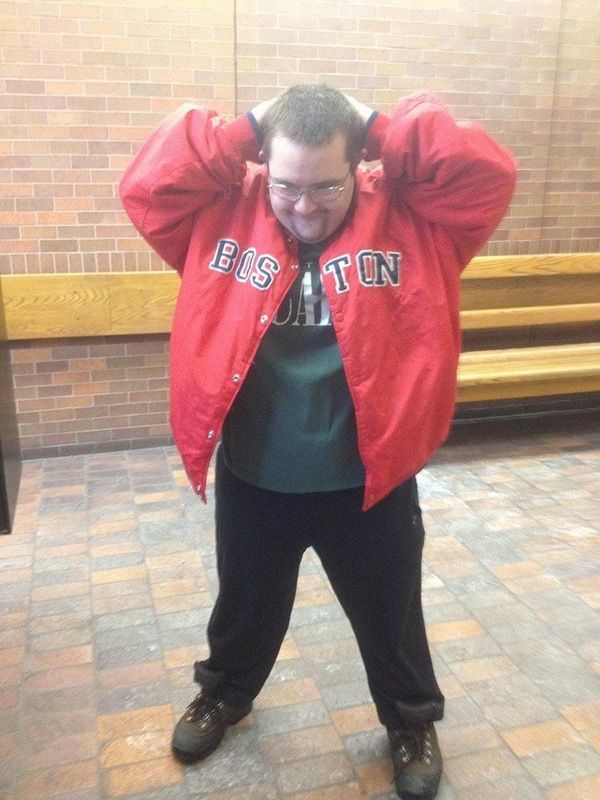 Josh set off the metal detector as we walked into the courthouse. As the guard approached him with the “wand”, Josh did a ‘spread um’ sort of move….even the guard was cracking up!
The CTR report gets sent back to DDS, DDS calls us and says the recommendation is clear that guardianship would be beneficial.  We then waited to hear.  They called us with a date to appear in court.  ALL OF THIS IS FREE OF CHARGE.  You can hire your own attorney, but it is our understanding that things will not move any more swiftly by paying a private attorney.  We just had our court date on 12/16/13.  We made the decision that dad, Tom and big brother, Tim, would petition the court to be Josh’s guardian and I, mom, would apply to be Josh’s Adult Family Care Provider (more info below).

We met our DDS-appointed attorney at the courthouse.  Our attorney, Josh, Tom and Tim stood in front of the judge.  The attorney told the judge that mom was in the courtroom and she asked me to come and stand before her with my family.  She asked Josh “who is this lady?”  Josh replied, “this is the wonderful girl, Karen.”  OR, in other words, mom!  The judge laughed.  She read through the paperwork, she asked Tom and Tim if they understood what their responsibilities would be, they replied yes, and she said petition granted.  It was as simple as that.  I’m sure this probate judge sees some absolutely crazy things in her courtroom and for a family to show up with all their T’s crossed and i’s dotted, with all family members present, with her ability to have a nice discussion with Josh, made her job very easy that day.

Now we have peace of mind that should anything medically happen to him, dad and Tim can seek appropriate medical care and we know that Josh cannot be taken advantage of regarding his finances.  In our book, there was no other option and the choice was very easy for us to make. 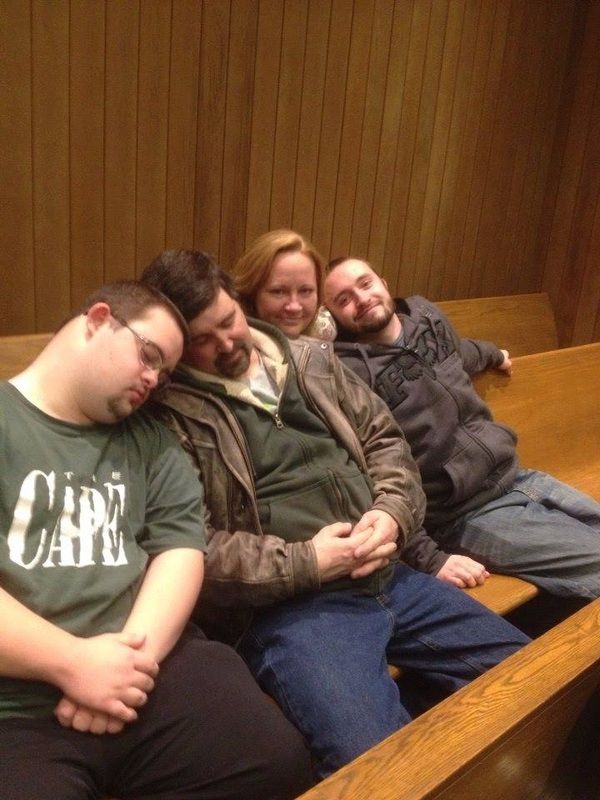 Waiting in court for our judge to come and for our hearing to begin!
As for the Adult Family Care Provider stuff mentioned above, this is a program run by our state and I know many other states offer a very similar program.  It used to be referred to as an Adult Foster Care program.  When a person with a disability becomes a legal adult and is unable to take care of themselves from an “activities of daily living” point of view, someone has to care for them.  In an attempt to keep people with disabilities in their communities and out of placement in group homes, nursing homes, or institutions of any sort, the program will pay a family member to render care and I have very recently been approved to be Josh’s Adult Family Care provider.  If anyone has specific questions about this program, you can private message me on our Facebook page and I will try to help you with this.  However, we were also guided through this entire process by the Department of Developmental Services.

So I think that’s it for now on the “becoming an adult” process and how local agencies play a much bigger role once a person with a disability reaches the age in which the world views them as an adult!  Again, please feel free to contact me privately on our Facebook page.  For those of you who know us, I’m always there checking in!  🙂

*Also, anyone who knows me well, knows to expect to find at least one typo on my writings.  It’s just that the thoughts flow faster than the fingers.  No need to correct them, unless it changes the context of the content.  I know they’re there somewhere!  🙂