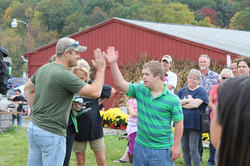 Ben King from “The Farm Kings”

I’m not a big TV watcher – unless it’s on Netflix or Hulu – but I know there is a reality TV show on GAC that I need to see. (Yep – thanks again Mom!)

Join the King Family of Freedom Farms as they battle the elements – and each other – to keep the family business going. This hardworking family will keep you laughing as they provide the Pittsburgh region with the very freshest produce possible.

From GAC site
The King family consists of Mom, Lisa (age  51) and her ten kids – nine boys and one girl.  The youngest of them, Ben (13), has Down syndrome.

I stumbled on an article posted on January 2nd on the show site entitled “Farm Kings Q&A: Lisa King on Motivating Children with Down Syndrome”   I wanted to see if she had some good advice that we could post on the site.

“Sometimes it’s very difficult to motivate children with Down syndrome,” says Lisa. “You give birth to nine other children who are very athletic, and then you have this child that you have to push and encourage. It’s a struggle for Ben.”

“Since we’ve started taking these walks with Ben, he’s lost about five pounds,” adds Lisa.”That just shows me that if I can inspire Ben to lose weight, I can inspire a whole group.” With Ben as her motivation, Lisa aims to inspire her family of customers to eat right and exercise. And she continues to find ways to challenge Ben to stay fit.

Hmm….   Okay, I’m going to reserve judgement until I actually see the show.  I know that sometimes you can get quoted out of context or your thoughts can get shortened by an editor….  You can read the rest of the article – and the questions they’ve gotten over the past two + seasons about Ben.

But the article made me want to see what else was out there.  I did a search (or two) and found a few more articles, most of which focus on the “hunky” older brothers and how they look with their shirts off.  (lol).

Another theme that shows up is how “The Farm Kings” is unique compared to other reality shows because it doesn’t focus on the personal lives of the family members.  Kudos to them for that!  And, I found a video clip where they had a fund raiser on the farm for Special Olympics.  Kudos for that too!
The Washington Post wrote an article about how the ‘Farm Kings’ do Thanksgiving, without the stress.  In the extensive interview that includes some recipes from Lisa, the only mentions of Ben is how he “prefers to carry “empty baskets rather than full ones” and “loves to set the table.”

Ben does have his own bio slot on the GAC website just like the other ten family members.

Now, I’m not sure why something seems strange to me – in all fairness I’ve never seen the show.  Maybe Lisa King is trying not to overexpose her youngest son for fear of looking like she’s taking advantage of him.  At first I thought maybe he didn’t like being around all the noise and commotion that must accompany a production like that.  I got my answer to that question in an article written in the Pittsburgh Post-Gazette:

It’s especially warming to see how youngest son Benjamin has adapted. Born with Down Syndrome, he was reluctant to be around the cameras at first but has grown to love the attention.

And again in an answer that Lisa wrote in response to a question she received via Facebook:

From Jamie Barker via Facebook:
Does Ben struggle in front of the camera?

Lisa: Haha, He actually  loves being in front of the camera, sometimes we actually have to tell him that’s enough.

So I’d love to get some input from people who are fans of the show and parents/caregivers of someone who has Down syndrome.

Choose as many as you think apply – or add your own answer.

In this age of bizarre reality television shows, social media exposure, and constant critical review of EVERYTHING out there, is "The Farm Kings" a good example of inclusion?  Does it promote a positive message? Will it add to the social justice movement?

Let me know what you think