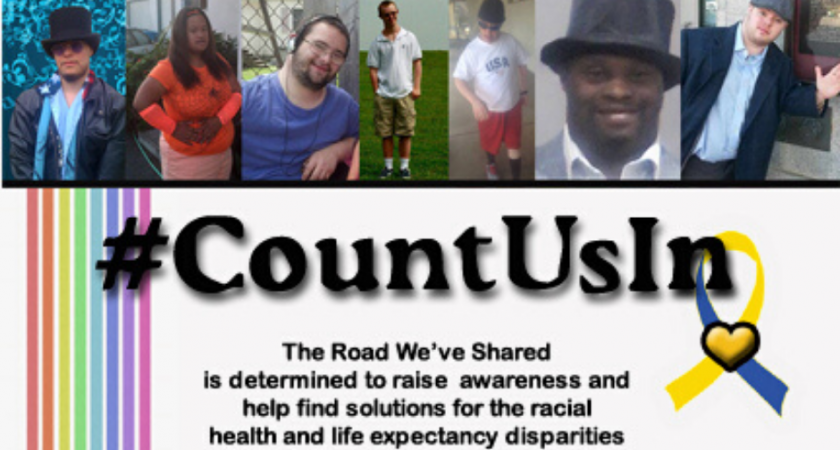 Six years ago, a friend of mine sent me a newspaper article that started me on a quest.  The BLM movement has finally gotten the object of my obsession some traction.

If you’ve visited our website anytime since 2014 you might have noticed that there is a link for “Count Us In” on our main menu bar.

“Count Us In” is the hashtag/theme that I’ve used since my first post on racial disparities in the Down syndrome community. My focus was the research that looked at the difference in life expectancy of individuals with Down syndrome based on race.

I have written about the topic several times and presented information to parents and advocates, including a session at the Down Syndrome Affiliates in Action convention in 2016 with a co-presenter from the National Institutes of Health. 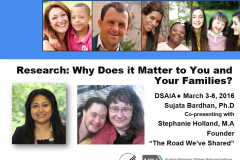 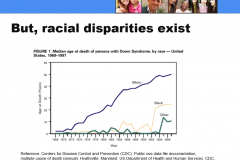 To say that I have been frustrated by the lack of engagement from the Ds community about this topic would be a huge understatement.  As people talked about the great strides that have happened in medicine that have allowed the life expectancy for people with Down syndrome to double since the 1960’s, they failed to mention that people of color have not been so fortunate.

A recent study has some people believing that the crisis is over.

“There are some small differences in life expectancy for people with Down syndrome between ethnic groups. However, there are pronounced differences between ethnic groups in age of death. In particular, more recent immigrant groups have lower ages of death, not because of less favorable survival rates, but because these groups include relatively more children and fewer older people.”

Unfortunately, scientists know that one study does not/cannot tell the whole story.  Researchers’ choices on things like how to count different minority groups can impact the results of a study and influence whether we can compare new findings to previous research.

Sometimes the details can confuse consumers of the research, other times researchers explain details and decisions made quite well.  For example, in the original study that attracted my attention, the researchers understood that people would wonder if congenital heart defects impacted their results and they included that within the study. 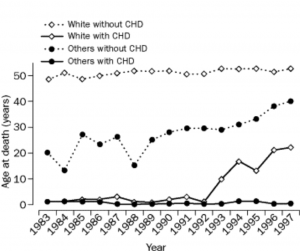 We need to keep up to date with new studies as they come out.  I try to tackle some of the new studies on my “Research Corner” of The Road We’ve Shared.  I reached out to the lead researcher of a new study published in May of this year, “Cause of Death in Adults with Down Syndrome in the US” (Landes SD, Stevens JD, Turk MA).  Dr. Landes gave me a short summary via email:

This study gives some great information and a place to start to understand why these differences exist.

Research is important and vital for the health and increased quality of life for our loved ones with Down syndrome. There are still issues with how research is done (for example, the inconsistencies in how death certificates are completed) and the relatively low number of studies that are conducted. We should continue to push for more attention to this topic.

Change Is In The Air

While our nation is in turmoil over how black people are treated by the police, many organizations, businesses, and individuals are making plans for changing the status quo. The NDSC has started holding town hall meetings to have important discussions around race in our community. You can find the recorded webinars and resources on the NDSC website.

In the first session, panelists discussed Ethan Saylor and how his story adds to the conversation around policing, disability, and law enforcement training.  In the second session the new NDSC President, Shauntel Neal-Howe and veteran Executive Director, David Tolleson talked about how the group is making diversity within the organization a priority and answered questions submitted prior to the event.

The only way our national groups can get better at meeting the needs of our diverse community is by engagement with that community.  So far this has not happened. I hope that the hyper-vigilance in our country is enough to spark the much-needed change.

There is always more that we can learn. One specific thing that I learned during the NDSC town hall meeting is that there is a vibrant online community dedicated to “African American/Black people who have Children with Down syndrome” on Facebook.

Do you know any other resources that I should share on The Road?

The moment that struck me during the second NDSC webinar was when this question came up on the screen:

“If we are all here in the DS community because we have a family member who has Down syndrome, what does color have to do with it?”

I love this question because it shows just how far we need to go and the level of privilege that exists within our community. I congratulate the person who asked it and admitted that they don’t understand. I admire the panel’s sincere answers to the question including David Tolleson providing some statistics that highlight the systemic disparities in the wider disability community.

I enjoyed listening to the personal stories from the panel and look forward to more conversations.

What are you doing in this moment to contribute to the conversation/solution?

Did you joined the NDSC meetings or listen to the recordings? If so, what did you find most helpful?  What topic would you like them to cover next?

Apparently, someone at the NDSC thought that #CountUsIn was a good hashtag for their efforts to recruit people to help address racial disparities.

I’d have to agree.