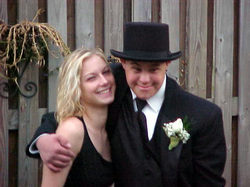 February is Valentine’s month – a time when many of us think about our relationships and how to express our love.  Here on
“The Road’ we’ve decided to make it a month of discussion around the relationships of our loved one who has Down syndrome.

The topic is broad for a reason – we want to hear what your thoughts are when we say “SOCIAL.”  If you’re like me, certain words immediately trigger a reaction.   What does the word and the concept mean to you?  Share your stories with us!

My Reaction to “Social”

When I think about Josh’s relationships I have mixed feelings.  He’s very social (unlike his mother lol) and LOVES to be with people.  He has a few great relationships with family, but for the most part, when he talks about friends, they’re people who have been in his life for brief periods.
He talks often about his “girlfriends.”   To him, Emma is one of those and her name comes up whenever someone asks if he has a girlfriend.  Emma is the daughter of a friend of my mother’s.  She happened to be the right age to be his “date” for the prom and was willing to go with him.  He hasn’t seen her since. 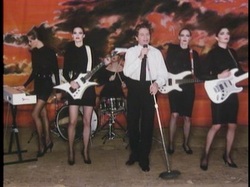 On one hand, I’m very grateful to Emma and my friend who went with us to Josh’s Prom.   It’s an experience that he will always remember and would not have had if I hadn’t stepped in.  That night, he looked like he belonged in a Robert Palmer video!
On the other hand, it’s heartbreaking to hear him talk about being “dumped” by his girlfriend – who in reality was just doing us (me) a favor.    It’s also worth mentioning that while at the prom, Josh spent most of his time following a “typical” girl from his class and wondering why she had her own date.

When Josh was younger (really young) he used to say he wanted to get married.  He said it A LOT!  So I came up with what I thought was a brilliant response: “You can’t get married until you’re 30.”   Moms out there might understand that this was meant to be a diversion at the time to get him to focus on something else.  Well, it stuck!  He’s been repeating it to me with regularity ever since.  Now it sounds more like “When I’m 30 I’m getting married!”   He just turned 27 so ….

Both of these scenarios (and others I’ll share later) have left me feeling guilty.  I’ve tried to introduce him to people and provide settings for natural friendships to evolve.  We’ve moved several times and I know that makes it difficult, but I wonder if I’ve done more harm than good by “facilitating friendships” along the way.  I’ve read tons of literature on the subject but it doesn’t really help when it comes down to your child’s happiness.  (More theory vs. reality).  There’s also lots to read out there about adults who have intellectual / developmental disabilities and their “friendships” with paid staff.  (Here’s a literature summary)

So what’s a mother to do really?  I look forward to hearing your stories this month about what has worked for you and what your concerns/fears are.  Where are you on this road?