A person with down syndrome can, in fact, be an introvert

A person with down syndrome can, in fact, be an introvert

By Mardra Sikora
Tweet
This blog originally was posted by Grown Ups and Downs February 26, 2014. 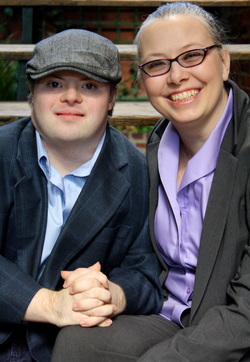 In my house a common argument is “Admit it, you’re an extravert.”

“Nooo – you are the extravert!”

This is because my husband, who denies being an extravert, is generally the most liked person in any room because he knows everyone in it.  He knows their names, their pet’s names, sometimes their kid’s names, and other criteria that can only be found by engaging in conversation.  He likes to make people laugh, and is often successful with this endeavor.  He is a musician and has performed for crowds of many sizes in many venues. He actually talks to the neighbors, and since we live in suburbia this is not a required social function. The only real complaint of his last employer was that, well, he spent too much time socializing. A trait which he saw as an integral part of his job as self-proclaimed good will ambassador between departments. Doesn’t really sound like an introvert does it?
And me, to make it shorter, I like to throw parties. My previous job required meeting many new people and maximizing networking opportunities. I mingle well. And, the way Quinn sees it, I force him from the house into the world to events/occasions he’d rather avoid (although most of the time he enjoys them immensely).

Then there’s Marcus. Marcus wants everyone to be happy. That is what is most important to him.

What some perceive as a contradiction is he is also a performer. He L-O-V-E-S to perform. There are many example of introverted performers. That doesn’t surprise me because although a performer is in front of a crowd, he/she is not with the crowd. It can actually be quite solitary.

The difference between an extrovert and an introvert is where you get your energy. Does it come from meeting new people? Or does it come from your time alone? Do you get a charge from groups and networking? Or do you need to charge up before or after that? Marcus used to sit by himself at lunch at school. Not because he was ostracized, but because he wanted those moments alone. I think Marcus’ favorite person to talk to is himself.

Not that he always wants to be alone. He enjoys a night out. He loves to go to shows. And a football game now and then is certainly a good time.  But while tailgating, he may prefer to sit off to the side and enjoy his hotdog. And every days list ends with him being sure – “Then Home?”

Replied with a happy sigh.

Why am I going on about this? I guess it’s just to be clear that Down syndrome does not make someone an extrovert. It doesn’t mean that Marcus wants to hug and talk to everybody he sees. It doesn’t mean he has a million friends and freely gives high-5’s to all. People seem to want this from him. People want him to be gregarious and free with social expressions. Often I find he has to work to accommodate people in this arena.

Sure – If he just rocked a song on a karaoke night – then Yes, he’s happy to share in congratulatory high-5’s with strangers, who doesn’t?  But out of the blue? Nah. He’ll leave you hangin’ as they say.

He’s friendly and polite. He’s anxious for everything to be ok.  He’s funny and likes to joke around. And no one wants to believe he’s an introvert. Of course, he’s a Sikora.